A mysterious outage is currently gripping the 11th-largest blockchain by market capitalization.

Stellar Lumens has long been one of my favorite projects, and especially among institutional builders, it is considered one of the most-established by far.

For the last 24 hours (approximately), many nodes on the network have been unresponsive, making the network effectively unusable.

The Steller Development Foundation is currently investigating the issue but has yet to release any explanation.

Even though some transactions are still going through, many exchanges have halted transfers in Stellar’s XLM token.

As we can see from the top right of the above CoinDesk screenshot, the price is down at the moment, no doubt swept up in the market wide dip, which we’ll explore below.

However, when I checked the price last night several hours after the outage became well-known, the price was actually up quite a bit.

If there’s one thing we can say definitively about this morning’s dip in the crypto markets, it’s that it took place on relatively low volumes.

As we’ve shown numerous times in these daily updates, trading volumes on exchanges have jumped significantly this year compared to last year.

Just eyeballing the below graph from Messari Crypto, we can see that the approximate average turnover for bitcoin was about $2.5 billion in 2020. This year, it’s more like $10 billion. 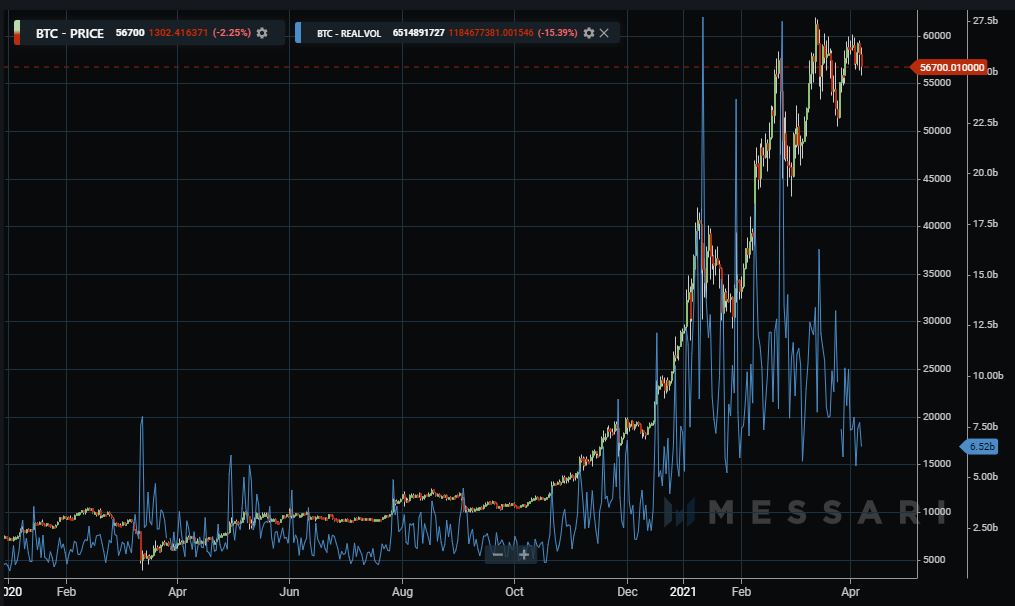 Looking at the above chart, it can be difficult to discern exactly what dip we’re talking about, but watching my Twitter feed this morning, it seemed like some analysts were preparing for the end of the bull run.

Bitcoin miners, on the other hand, seem as bullish as ever, possibly even more so as the cryptocurrency’s hash rate has now reached a new all-time high of 179 million exahashes, according to Messari data.

What’s more, we have reason to suspect that miners are hoarding bitcoin right now instead of selling it back to the market, putting a further damper on supply in an already scarce market.

Meanwhile, the governments and central banks of the world are upping their game in order to fight bitcoin.

As they know, it is quite impossible to kill bitcoin, and any attempt to ban it tends to be met with increased volumes.

No, the only way for authorities to fight bitcoin is by competing with it.

So, now we can see many governments coming out with their own initiatives to create a form of digital currency.

Central bank digital currencies (CBDCs) are something many of us who follow the space have been watching closely over the last year.

The thing is, each one of the initiatives seem to be country specific. China has one. Japan is reportedly creating one. Sweden just announced their own E-krona pilot.

One of the great advantages of bitcoin is that it’s international. So, it will be interesting to see what the different countries do to make their respective CBDCs interoperable.

Interestingly enough, The Bank for International Settlements (BIS) recently released a paper emphasizing that governments could potentially address the problem of cross-border payment inefficiency by creating CBDCs that are interoperable through something called Multi-CBDC arrangements (or mCBDC arrangements).

It will be interesting to see how much the global environment for both cross-border payments and CBDCs evolves in the coming years.

The post A Bullish Dip in the Digital Asset Markets appeared first on Bitcoin Market Journal.

If you have any questions about 'A Bullish Dip in the Digital Asset Markets', let us know.