First, let me say I’m a little intimidated by your expertise.
• You started as an investment banker at Goldman Sachs.
• You were chairman of the CFTC.
• You won the Alexander Hamilton Award (not for the musical, but the actual Treasury that Hamilton founded).
• You reformed the financial regulatory system, for which you were awarded the Tamar Frankel Fiduciary Prize.
• You taught blockchain at MIT, where students awarded you the MIT Sloan Outstanding Teacher Award.
• And in your infinite spare time, you ran nine marathons.
When do you sleep?

That said, I don’t envy your current role as head of the Securities and Exchange Commission. You’ve got an IPO boom, you’ve got meme stocks, you’ve got China-related companies to worry about.

And you’ve got cryptocurrencies.

I’m writing you not as an expert on securities regulation (always popular at parties), but simply as one of the American investors that the SEC is charged to protect.

As an investor, it seems to me that the spirit of the SEC has gotten lost in the letter of the law. I’m hoping that you will show your visionary leadership in helping investors understand what’s going on with crypto.

As an investor who has done well by investing in cryptocurrencies, I’m constantly waiting for the other shoe to drop.

I speak for many investors who say, “we want to follow the law.” If the SEC says all cryptocurrencies are illegal, unregistered securities, then we’ll sell them.

Still, you have influence at Congress, which does make the laws.

It seems to me that the SEC is engaged in a whack-a-mole game of trying to go after individual crypto projects, constantly asking whether each one is an unregistered security, using the ancient Securities Act of 1933 as your guide.

As a professor of blockchain, I know you are aware they didn’t have blockchain in the 1930s.

The ease and speed of creating new digital assets, combined with the furious pace of innovation, means that this approach is not sustainable. It would be like trying to police websites during the first Internet boom.

I use the word “police,” because as an investor, that is how I have come to view the SEC. It seems to me like a great market cop, trying to find bad actors and issue speeding tickets. With digital assets, this approach leaves investors like me more confused than anything.

I share Coinbase’s recent frustration at the alleged SEC threat to sue them over their Lend product. As an American investor, I would like to take advantage of Lend, because a 4% return is a lot better than the <1% my bank will give me on a savings account. If it’s illegal, I won’t use it. It’s hard for me to see why it would be illegal, if Coinbase is ultimately liable for reimbursing me if things go wrong. What gives?

“Maybe it’s illegal, maybe it’s not.” This sums up the SEC’s approach to the entire digital asset market.

“Some blockchain projects may be unregistered securities” is another way of saying, “Maybe it’s illegal, maybe it’s not.”

“If you use Lend, you may be investing in an unregistered security” is another way of saying, “Maybe it’s illegal, maybe it’s not.”

“If you do your due diligence on XRP, investing with eyes wide open, you still may be investing in an unregistered security” is another way of saying, “Maybe it’s illegal, maybe it’s not.”

I don’t think this was the original spirit of the SEC, which was to protect investors. And here is where I call on you for visionary leadership. 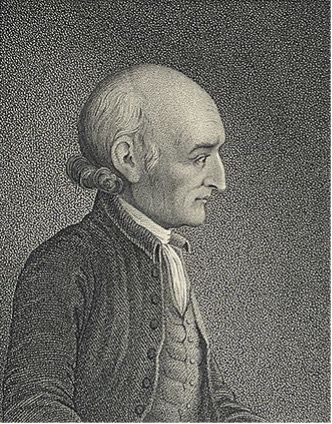 “A call to visionary leadership”

Perhaps no one better exemplifies the quiet visionary leader than George Wythe.

He was one of the founding fathers of the United States, but not one who got memorialized on money. He does not have the fame of Thomas Jefferson and James Monroe, but he was their law professor. I see in the two of you a kind of quiet resolve in a time of historic change.

And, let’s be honest, you kind of look like him.

Wythe’s views shaped the young nation, as he worked to interpret existing English common law against the backdrop of a new country. He didn’t throw everything out; to the contrary, he reinterpreted existing law in a new context.

He was also formative in creating new laws, first in establishing Virginia’s new state government, then as part of the Constitutional Convention to establish the United States itself.

I think of your influence on the Dodd-Frank Act – perhaps the most sweeping regulatory legislation of our lifetime – as a similar prelude to the task before you now.

Wythe was also a strongly principled man of excellent character: he spent the last part of his life wrestling with the problem of slavery, eventually emancipating his own slaves. Certainly our work in this new world of money must be woven with a high moral fiber.

Visionary leaders like Wythe grasp the essence of a thing. They get at the spirit of the law, not just the letter.

That spirit behind the 1933 Securities Act is still alive and vibrant, though the legal structure around it has calcified, layer by layer, into the tiny hard shell the SEC finds itself in today.

Visionary leaders break through these shells by finding new ways to interpret the old rules.

The best investors can hope for is a cat-and-mouse game of the SEC suing crypto projects here and there, with no real understanding of how or why. We want to follow the law, it’s just that no one can figure out what it is.

I wonder why the SEC doesn’t just work with the blockchain community for solutions.

You certainly have the brains in this community. You also have a built-in incentive, because we all want more regulatory clarity. And there are enough honest, hardworking people in this industry to make it worth your while (we outnumber the scammers 100:1).

Ultimately, what will be needed is a sweeping reform of existing legislation, on the scale of Telecommunications Act of 1996. Recognizing that the Web was a new “thing,” those laws allowed the Internet to bloom, and America to become a leader in the Information Age.

Today, digital assets are the new “thing,” and we have a similar opportunity to lead this burgeoning world of blockchain. But it will require a quiet, visionary leader like George Wythe. In my view, there’s no one better suited for the task than you.

Give us clarity. Engage in dialogue. Show visionary leadership.

If you have any questions about 'An Open Letter to Gary Gensler', let us know.