Contrary to popular belief, stocks are a terrible barometer for economic health.

At times, they’re even terrible at reflecting investor sentiment. Today, we have a rather picture perfect example of that coming from the U.K.

Yup, Brexit is encountering issues once again. Still, the issues remain the same, but the deadlines keep getting more serious.

Not really sure why, but many asset managers were actually starting to get optimistic about the future of the British pound, and this article shows a lot of evidence of how that changed in a heartbeat this morning.

While most U.K. citizens are already rather used to the melodrama, and many have learned to tune it out, the currency markets were clearly caught unprepared as the Cable (British Pound vs. USD) fell to its lowest level in two weeks.

It was not a humongous move by any stretch of the imagination, but enough to capture the attention of a currency market whose volatility has long ago been squelched by artificially low interest rates.

In contrast, the U.K.’s main stock index, the FTSE 100, rebounded quite quickly. There are two reasons for this apparent paradox.

One is that stocks have a tendency to trade opposite of their home currency. If the pound goes down, the relative value of stocks in the U.K. tends to go up. Two is that in export-heavy economies such as this, a softer currency is seen as good for business.

Here we can see the morning’s price action, with the Cable in blue and the FTSE in red. 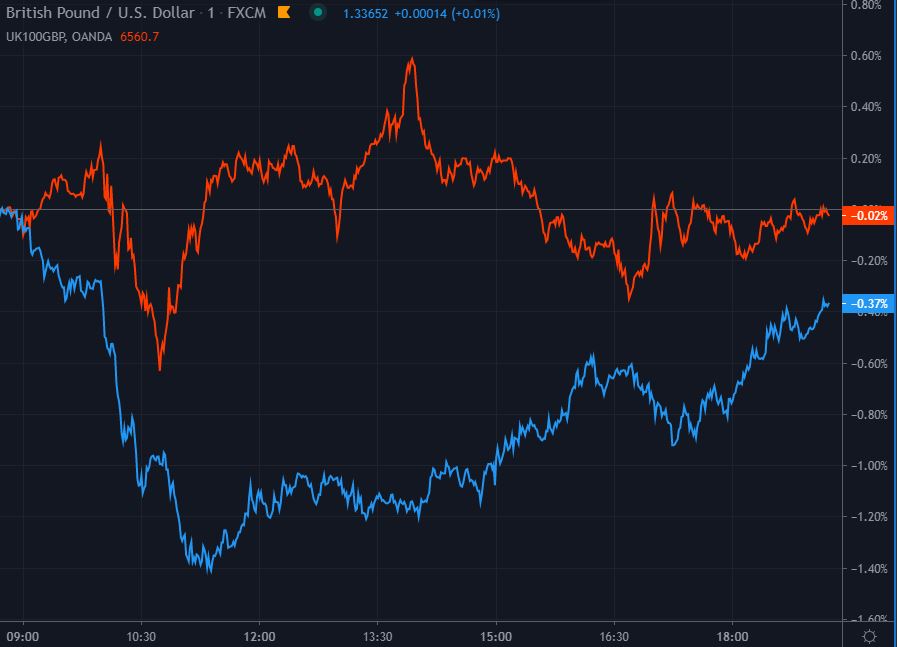 Ignoring the fundamentals of Brexit for just a moment, there’s also a rather acute technical reason why the pound might take a dive right now, and we can really see it well on the chart when zooming all the way out to the 2016 referendum that placed us in this situation to begin with.

Please note the dotted yellow line representing the perfect psychological level of $1.35 that has acted as both support and heavy resistance throughout this entire period. 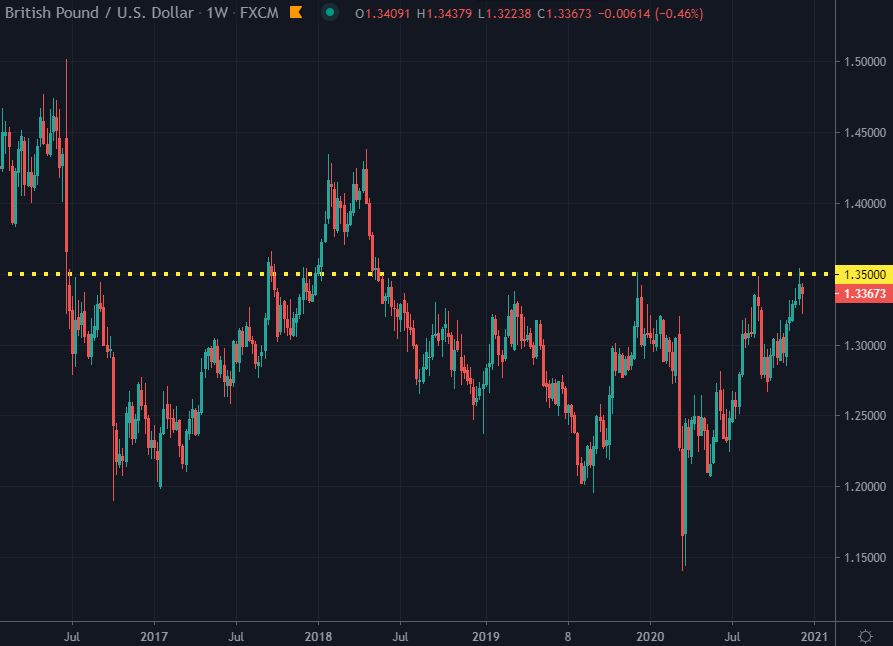 So, it would stand to reason that a level this strong should naturally serve as a point of reflection. Will the pound be rejected yet again, sending the currency back to multigenerational lows, or will it blast through and restore former glory for country and queen?

And how much of this actually has to do with fish?? The answer might surprise you.

No, this is not a discourse on U.K. fishing rights. You couldn’t pay me enough to research that subject well enough to weigh in with any sort of opinion.

Actually, what I wanted to point out has a bit more to do with people’s perception of markets.

The problem is that the natural way to try and weigh the impact of the volatility is by measuring the pound against the U.S. dollar, which is the world’s global reserve currency and main tool for benchmarking prices, but itself is quite volatile.

In fact, if we take the exact same chart we have above and overlay the US Dollar Index (green) on top of it, we can clearly see that even though the GBP seems more or less stable, losing only 6% against the dollar, the dollar itself has actually fallen nearly 9% in this timeframe when measured against other major currencies. 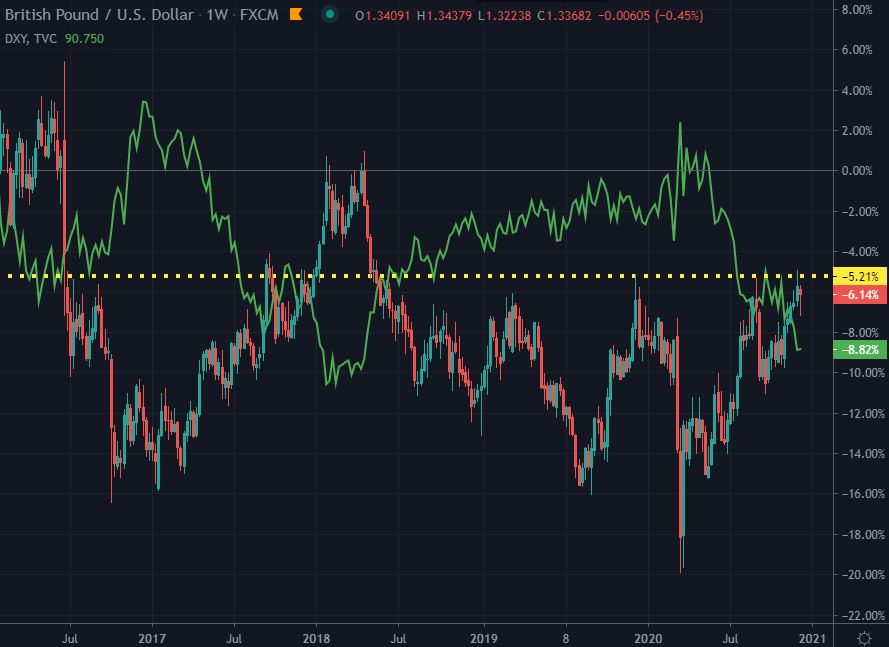 Yikes!!! So who is really winning here?

Forex veterans will give you the obvious answer, the euro!!

In this timeframe, the single currency has risen 12% against the U.S. dollar and nearly 20% against the British pound.

However, to say that the euro has risen in value over the last four years would be a grave mistake.

In fact, the value of the euro has been steadily declining ever since it was created, as is evidenced by the following chart showing its purchasing power over time. 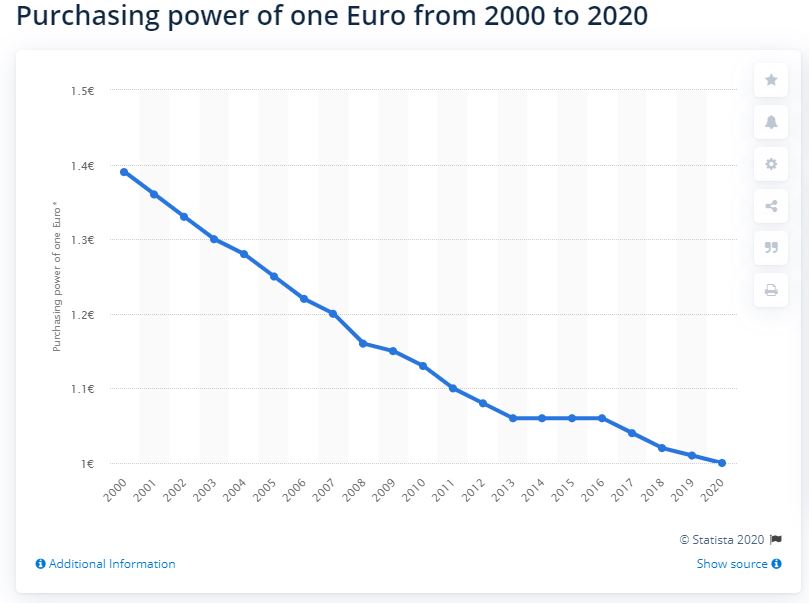 So there we have it.

All fiat currencies decline over time, and some do so faster than others.

This is why, as we alluded to in the opening, currency trading just isn’t fun anymore. I mean, why get caught speculating on which paper-backed money will fall the fastest when you can just as easily join a clear trend investing in hard assets that appreciate as the currencies fall?

The post Bitcoin Holds the Line Above $19,000 As GBP Weakens Amid Brexit Drama appeared first on Bitcoin Market Journal.

If you have any questions about 'Bitcoin Holds the Line Above ,000 As GBP Weakens Amid Brexit Drama', let us know.