Not that it was really worth covering at the time, as some fear, uncertainty, and doubt from the Federal Reserve was the last thing on my mind as bitcoin fell on Monday, but here’s the article including comments from U.S. Treasury Secretary Janet Yellen, who previously chaired the Fed.

It is a bit amusing that Yellen singled out Bitcoin’s efficiency. Not sure how many of you have ever tried to send an international wire before, but as someone who’s fairly familiar, I can tell you that sending bitcoin is a walk in the park in comparison.

It’s faster, cheaper, and much more user-friendly than any bank wire, and for myself, it is much more efficient on every level. At the end of the day, it’s up to the user to decide.

The thing is, the national settlement system that Yellen is no doubt comparing bitcoin to, known as the Fedwire system, isn’t without flaws. In fact, here is a perfect example. …

Sure, every centralized computer system goes down from time to time. Even Google, Amazon, and Facebook have their server errors and such, but Bitcoin does not go down.

In this case, the simplicity of the system ensures it’s efficiency and the redundancy ensures it’s stability.

Just yesterday, in testimony before Congress, Fed Chair Jerome Powell, for the first time that I’m aware of, described a digital dollar as a “high priority project.”

“We are looking carefully, very carefully, at the question of whether we should issue a digital dollar,” he specified.

There is no doubt that they are terrified of the advancements that China has already made with their digital Yuan.

At a glance, it might seem like a really good day in the markets. There are plenty of green patches on the board, along with a smattering of red, but it’s not anything to worry about.

This complacent view, of course, would require a fair bit of cognitive dissonance, or a really faulty short-term memory.

What a week ago seemed like a market that had climbed a tree and couldn’t figure out how to get down has now turned into a dead cat bounce.

The Dow Jones industrial average has had little trouble shooting to a new all-time high today, but the tech-heavy Nasdaq is clearly struggling to stay positive after yesterday erasing all of its 2021 gains.

One investor who is out buying the dip, who I know many of our readers adore, is Cathie Wood from ARK Invest, who has thrown an additional $120 million into her YOLO Tesla position, despite what can only be described as a clearly overvalued share price for the innovative electric car maker.

So far, Wood’s investment seems to have paid off, as Tesla shares have rebounded this morning and were up almost 5% on the day at $733 per share.

For a car company that struggles with making money from car sales, that seems expensive to me, but what else are you gonna add to a basket known as the “ARK Innovation ETF”?

The way Wood explains it, the bet is more about automated driving then electric vehicles. Either way, it will be an uphill battle for Musk and friends to maintain a competitive edge, at least in my limited view.

While Wood was out on a buying spree, it seems that the market was selling off in the face of accelerating bond yields, and her fund saw sharp outflows.

It’s still one of the most popular funds out there though, and it has been performing fantastically throughout the pandemic.

In fact, if we look at the graph below, we can see that Wednesday’s outflows almost exactly matched a large spike in early January where the flows were coming in. 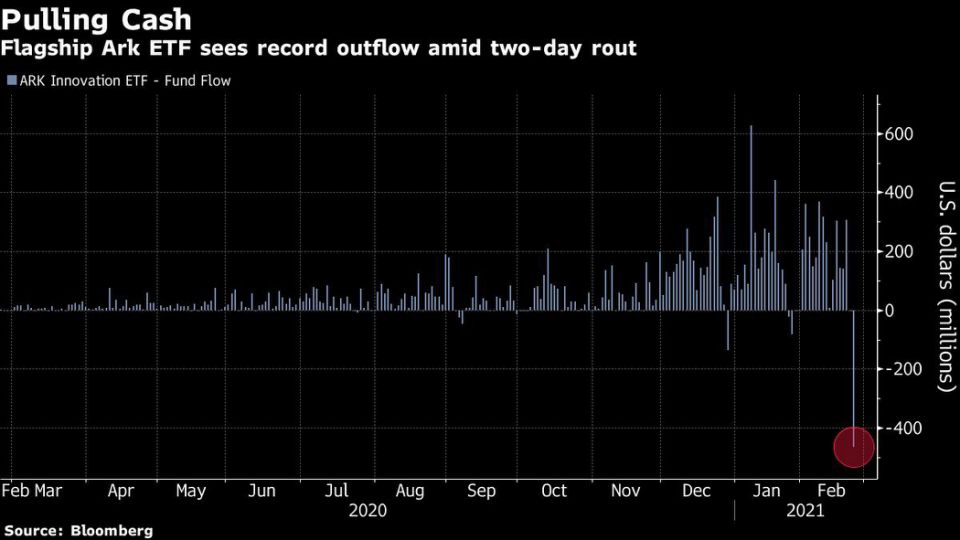 Not saying this as a bad thing, but it seems the market is a lot more eager to take profits these days than they were say two weeks ago.

The post Bitcoin Moves Back Above $50,000 Despite Yellen’s Comments appeared first on Bitcoin Market Journal.

If you have any questions about 'Bitcoin Moves Back Above ,000 Despite Yellen’s Comments', let us know.