Sometimes, the hardest thing to do in the entire world is to sit on your hands, but sometimes doing so is very necessary.

This is true in many aspects of life, where doing nothing can actually be more fruitful than doing something.

A simple example is watering the plants or feeding the fish. You might want to do it every day so that they have all they need, but if you do it too much, they’ll end up dead.

In the world of investing, and even more so in trading, overanalyzing can be the number one killer of a good strategy.

Also, a little leverage can be a very powerful tool, but using too much is a good way to get rekt.

By far the two most common reasons newcomers constantly fail in the financial markets are trading too much and using too much leverage.

According to an old quote commonly attributed to Warren Buffett, “you don’t make money from buying and selling, you make money while you wait.”

With that, and you won’t hear this from me often, now does not seem like a great time to trade.

That’s not to say that long-term investments should necessarily be closed. That would seem like a gross violation of the precept of our discussion.

Rather, for short-term traders, now is a particularly confusing time across many markets.

So, let’s take a moment today to discuss some of these mixed signals and what the best course of action might be.

Let’s take a look at bitcoin, which is coming off some absolutely fantastic gains this year and a 272% rebound from the pandemic lows to the recent almost all-time highs.

Over the last few days we’re seeing some extremely tight consolidation just beneath the key psychological level of $20,000 per coin. Yet, we don’t really have a great indication of which way that will break.

On the fundamental side, things just don’t seem as bullish as they did over the last few weeks and months.

The statements made by Kevin O’Leary are strikingly sobering. Even though Anthony Pompliano has taken an apparent victory lap after “convincing” O’Leary on the attributes of the digital currency, the comments O’Leary made were still extremely reserved.

Meaning, if the market comes to fruition, then I will buy more. There are certainly no guarantees of that happening, though.

Various bitcoin-backed exchange-traded funds have been shot down by the Securities and Exchange Commission over the years, and U.S. regulators have not thus far given any indication that their concerns about a volatile and manipulatable market have been assuaged.

O’Leary has been added to our List of Reasons to be Bullish on Bitcoin, but with his note of reservation, along with a link to hear the full Pomp Podcast, an extremely interesting episode for all aspiring investors.

Furthermore, the news from Guggenheim carried similar undertones. They’ve basically applied for approval with the SEC to invest up to 10% of their portfolio in bitcoin.

Once again, we have no indication of whether or not that will be approved, or if it is, how much of that 10% will actually be deployed.

Yes, the narrative we’ve been portraying lately is correct, there is a much higher degree of institutional involvement and interest.

However, we don’t have any great indication to tell us just how much of the recent rally was driven by these new players, and how much of it was retail players trying to piggyback on them.

Something similar seems to be playing out in the stock market right now where we see lots of excitement around the vaccinations, especially as people start to receive them in the U.K. today.

Yet, the markets have come so far so fast that there seems to be a reluctance to go higher. Not sure how long that will last, however.

So, let’s pull up the bitcoin chart. Here I’ve highlighted a few key price levels that are worth watching.

The top level of $20,000 is highlighted in red. Certainly if we blow through that, all bets are off and we can resume our zealous bullishness.

However, if we do turn around, there are several noticeable places of support. 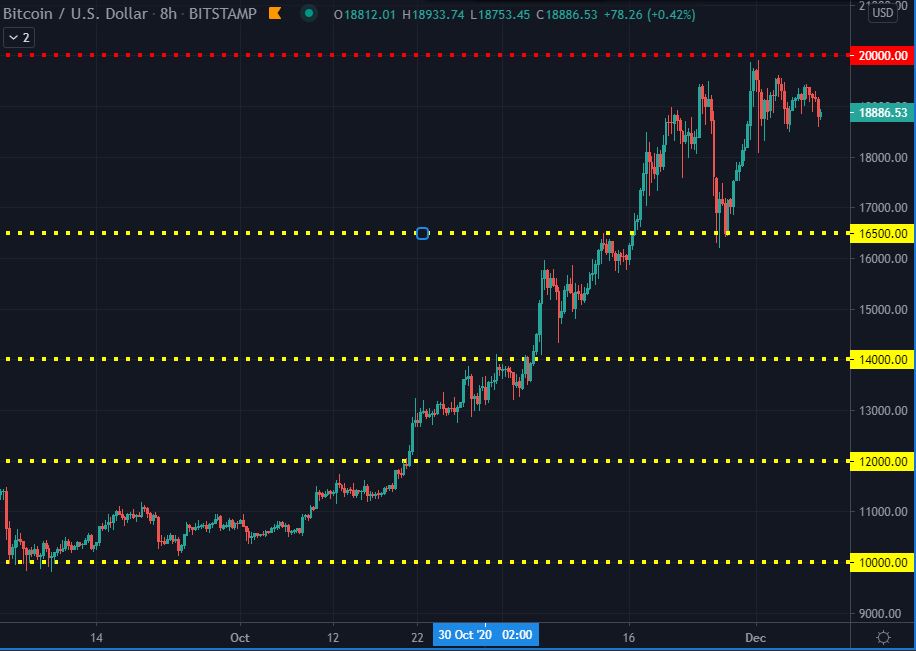 With this chart in mind, perhaps you can understand my reluctance to sit fully exposed at the top of the market.

Speaking strictly as a trader, the risk-reward just doesn’t add up.

You can see it in my eToro account as well, as approximately half of it is in cash, at least for the time being.

Here’s hoping for a better entry price in the next few weeks. We’ll see how it goes.

If you have any questions about 'Bitcoin Retracts Below ,000 As Fundamentals Look Less Bullish', let us know.