Go on, take the money and run. Hoo Hoo Hoo!

So goes the classic song from Steve Miller Band. Not only does it have a groovy beat, but it also tells a story. By far, it’s the chorus though that gets most people. When you’re flying by the seat of your pants, sometimes it’s best to just take the money and run.

Yesterday, one of the most popular podcasters of all time announced that his show, The Joe Rogan Experience, will very soon move off of YouTube and be available exclusively on Spotify.

The deal will reportedly net Joe $100 million and allow him to keep the right to bring on any advertisers he likes.

Now, $100 million may seem like a lot of money, but for a guy who’s viewership quite frankly puts some of the largest network television stations to shame, it’s really not that much.

According to a rough calculation, Rogan walked away with only three times his annual value, whereas some of his competitors have struck deals for 10 times or more.Not only that, but the jump in Spotify share prices on the announcement has bumped their market cap by more than $1 billion.

So, I’m certain that if had he held out, Joe could have gotten a much better deal. I guess being a great podcaster doesn’t necessarily prepare you for hardcore negotiations, but also there’s an element of timing that perhaps Joe had sensed.

YouTube has increasingly been censoring content on their platform lately, and with all of the controversial guests that Joe likes to entertain, it was only a matter of time before they started pulling his episodes. So I guess that sometimes, it’s better to just take the money and run.

The strong pattern has once again repeated itself. Stocks dropped during the Asian and European session, only to make a miraculous comeback for the New York opening bell. I believe this is the third day of this nonsense in a row.

With the strong commitment from the Fed to support the markets during this troubling time and their reassurance that they can deploy an “unlimited” amount of capital to that end, the question arises, can stocks even go down?

On the one hand, the market is bracing itself for a wave of bankruptcies that are likely to arise due to the lockdown measures in the United States, and the impact that they will no doubt have on over-leveraged companies. But, if the Fed is ready to stand up and be the buyer for every seller in the market, it will be interesting to watch what will happen next.

Economic data released today was pretty bad, but not as bad as economists had forecast. The PMI figures from Europe were pretty dismal in a historic context, but again, better then expected. The U.S. has reported its weekly jobless claims at 2.4 million, slightly worse than expected, but not by much.

The issue is that stocks simply can’t drop. Investors are so on edge right now, that even a 3% decline in the major indices could incite a panic. So even the slightest bit of weakness is being met with a load of buying.

As for myself, I’ve just taken the sage advice as per the Steve Miller Band and the title of today’s message. I’ve just reduced my exposure to crypto, putting much of my resources in cash.

I think there’s a fair chance of the market turning around and blasting through $10,000.

However, the downside risk is great right now. We still don’t know who moved those old coins (discussed in yesterday’s update).

The transaction fees on the Bitcoin network are continuing to rise. This is a metric that we’ve been watching very closely and were expecting to correct itself after the difficulty adjustment, but it has not.

Finally, just looking at the chart, we’re now sitting at the top of a long standing wide range, the bottom of which could easily be $6,000 or even $4,000 per coin. 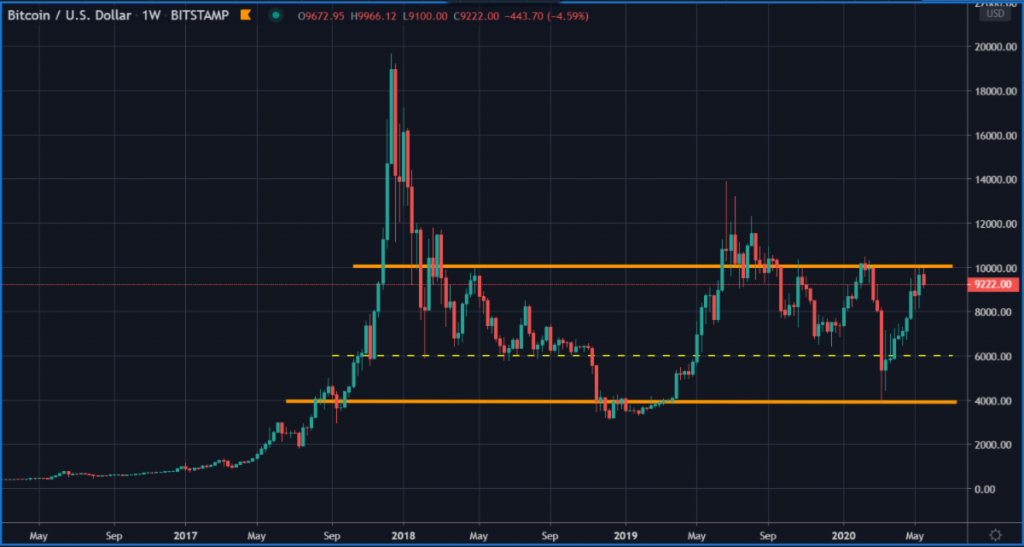 We’ve come a long way already, and the account is now up nearly 40% since the start of the year. So even if there’s only a 10% chance of a massive plunge, I’d hate for it to erase all our hard work until now. As this is a crypto-only account, the options to hedge such a move are quite limited, so we move to cash until some of the uncertainty clears.