Article Content hide
1. Whale Reads
2. Your Money is Growing
3. The Big Picture with Evamarie Augustine
4. But Is It Really A Sprint?
5. Hot Tweet
6. Spread This Meme

“The Infinite Machine” to Become a Movie and NFT (The Defiant): Camila Russo’s bestselling book on the history of Ethereum will be made into a movie and NFT collection, the author announced today.

Investor takeaway: The book is not only a fun read, it also gives you a sense of what you’re buying as an Ethereum investor. And for long-term investors, the movie will only raise Ethereum’s profile (and, hopefully, price). If you haven’t read the book, put it on your Amazon wishlist.

Your Money is Growing

Investor takeaway: With the additional publicity and exposure to Ethereum from “The Infinite Machine” movie, expect even more of the masses to start jumping in. HODL the GODL.

The Big Picture with Evamarie Augustine

In 2018, a blog post from U.S. think tank The Brookings Institution stated:

“Blockchain is no longer just a tool to mine cryptocurrencies or manage databases. Now U.S. state governments have recognized the technology’s potential for the delivery of public services, and are at various stages of implementation.”

“From applications ranging from management of the electrical grid and utilities to how companies manage global supply chains, the potential for blockchain is truly revolutionary.”

But many government projects have failed to materialize, with state chief information officers saying they didn’t believe blockchain could solve any local government issues, at least until last week. …

FEMA’s reputation for helping in a timely manner has been questioned by many. In fact, the government entity’s own analyses point to federal emergency assistance not being adequately distributed to those who are most in need.

But the agency is looking to restore its reputation — with blockchain. Deloitte announced a partnership with technology firm Ava Labs to leverage blockchain for a disaster recovery platform. Ava Labs supports the development of Avalanche, which is an “open, programmable smart contracts platform for decentralized applications.”

The platform will assist in streamlining disaster reimbursement applications that local and state governments submit to FEMA. The cloud-based platform, called “Close As You Go,” will utilize the Avalanche blockchain, allowing local governments to spend time on the recovery process rather than validating claims.

The news helped AVAX, the native token of Avalanche, hit an all-time high on Sunday, according to CoinDesk.

Will this partnership be a watershed moment for the U.S. government’s use of blockchain technology?

There have been many discussions surrounding the use of blockchain by government entities, but the Deloitte/Ava Labs venture seems to be one of the first involving a U.S. government agency working with a private company on this type of project.

But Is It Really A Sprint?

U.S. government officials are still working to create a sufficient regulatory framework for digital assets, more than a decade after bitcoin was first introduced.

During his tenure, Brooks allowed banks to custody cryptocurrencies and hold U.S. dollar reserves against stablecoins.

In the latest interpretive letter, Acting Comptroller of the Currency Michael Hsu clarifies that banks can indeed perform the actions described in the prior letters, but will now need to obtain a notice of “non-objection” from their designated supervisory office.

Also yesterday, the OCC, the Federal Deposit Insurance Corporation and the Federal Reserve Board of Governors issued a joint statement detailing how the agencies would fast track policy goals in 2022.

The three agencies are looking to provide “coordinated and timely clarity where appropriate to promote safety and soundness, consumer protection, and compliance with applicable laws and regulations, including anti-money laundering and illicit finance statutes and rules.”

While the joint statement could potentially signal progress, there are still many unanswered questions regarding crypto regulation in the U.S. 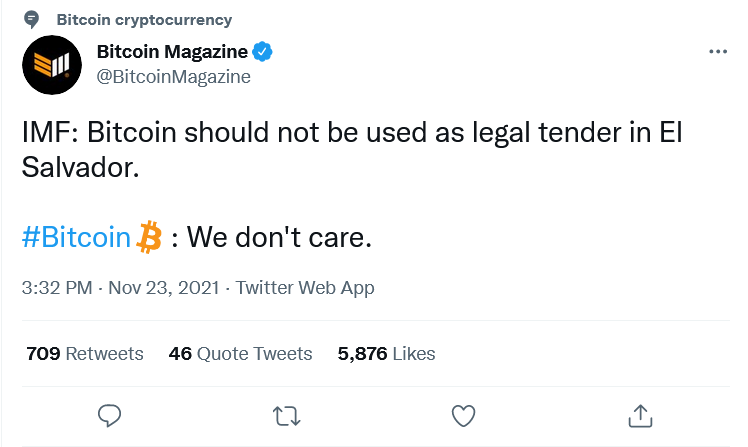 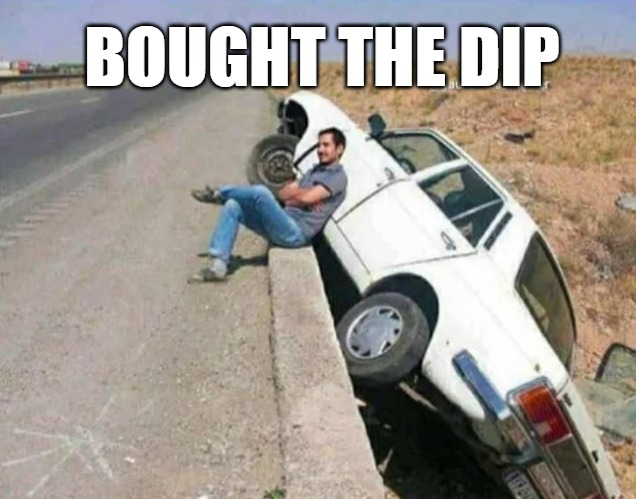 Don’t buy the dip; avoid the ditch.
(Click to spread this meme.)

If you have any questions about 'Crypto Investor News for 11/24', let us know.