The Ethereum price has paused ahead of the $3,400 level as BTC also struggles at the $50k level.

ETH is now trading at $3,173 but is finding support within an ascending triangle formation which is often bullish in an uptrend.

Demand for Ethereum is strong according to data provider Santiment, with a three-month high in average gas (Gwei) used. 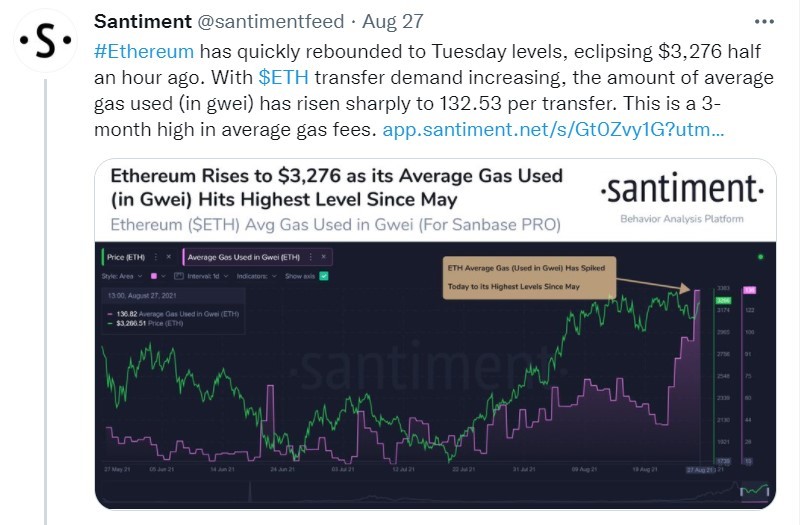 Ethereum was boosted by the recent London upgrade that has supporters buzzing about the potential for a faster, cheaper, and more energy-efficient ETH, which many see as the catalyst for a “flippening,” where it could vault above Bitcoin.

There is still a way to go with BTC at a market cap of $900bn and ETH at $337bn, although ETH did meet the hallway mark with a valuation of $500bn back in May.

The highs for ETH back then were at $4,380 and a move above the resistance here could open that level up once more.

Bitcoin could get support from the US dollar weakness after Federal Reserve Chair Jerome Powell refused to lay out the specifics for the central bank’s removal of stimulus to the US economy.

Markets had been hopeful of a path forward after strong US jobs numbers and higher inflation. Powell said the economy no longer needed the same level of policy support, but added that the central bank should refrain from making an “ill-timed policy move” in response to this year’s inflation which they see as “transitory”.

The Fed chair said that they could begin unwinding asset purchases before the year-end, but the pace is likely to be slow and will not lead to any quick hike in interest rates.

The timing and pace of the coming reduction in asset purchases will not be intended to carry a direct signal regarding the timing of interest rate lift-off, for which we have articulated a different and substantially more stringent test.

Comments from other Federal Reserve officials recently had hinted of an imminent tapering as early as September. The dollar suffered on the news and could be pressured in the weeks ahead, which would help commodities and Bitcoin. 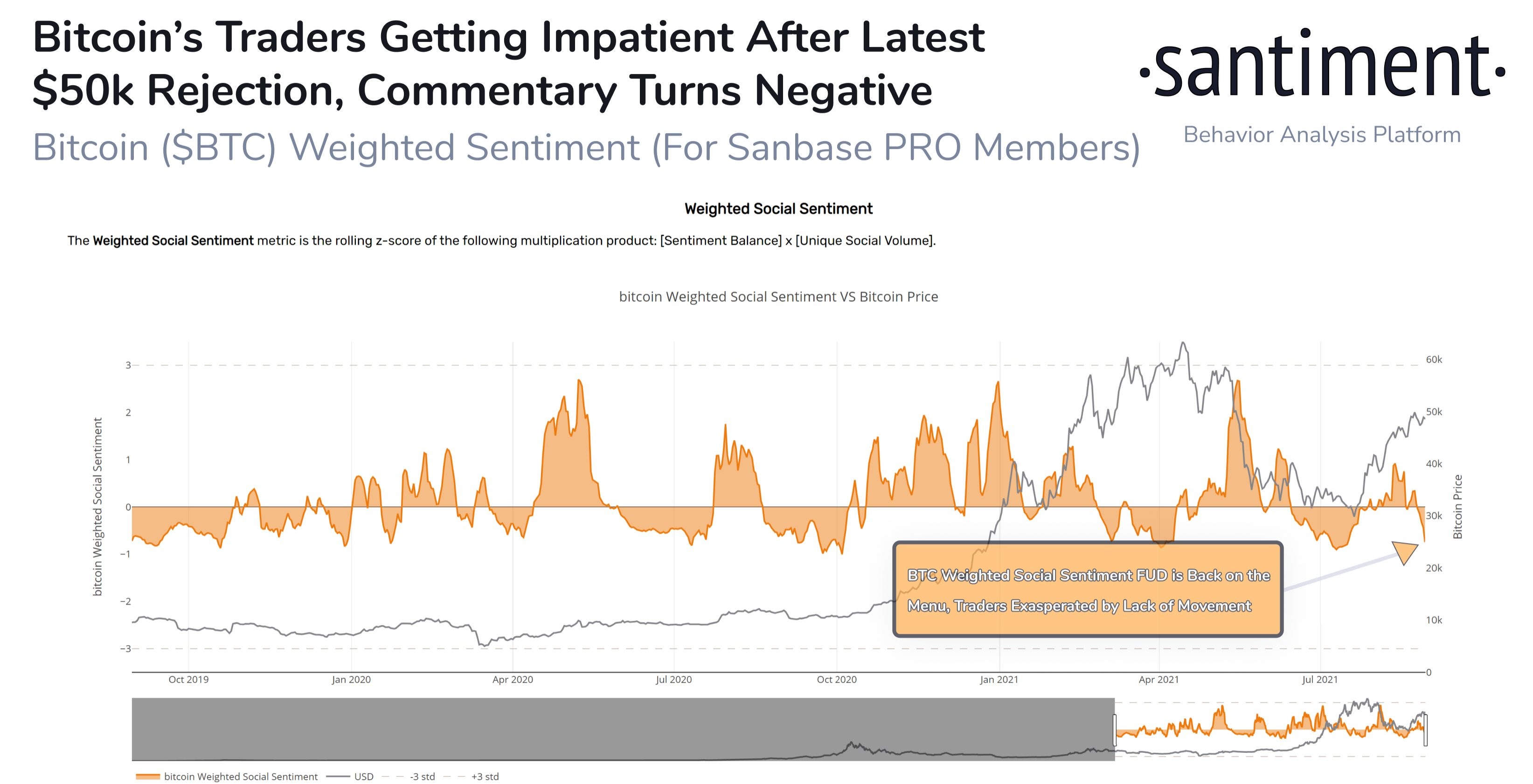 Commentary on social media is turning negative according to the latest metrics and that could support a push higher in BTC.

The Decentraland project saw its MANA coin back at the $1.00 level as data shows NFT buying is at higher levels than the March craze.

CoinMetrcis said in a report:

Over the last two weeks NFT sales have exploded to levels well beyond the NFT boom seen in March. 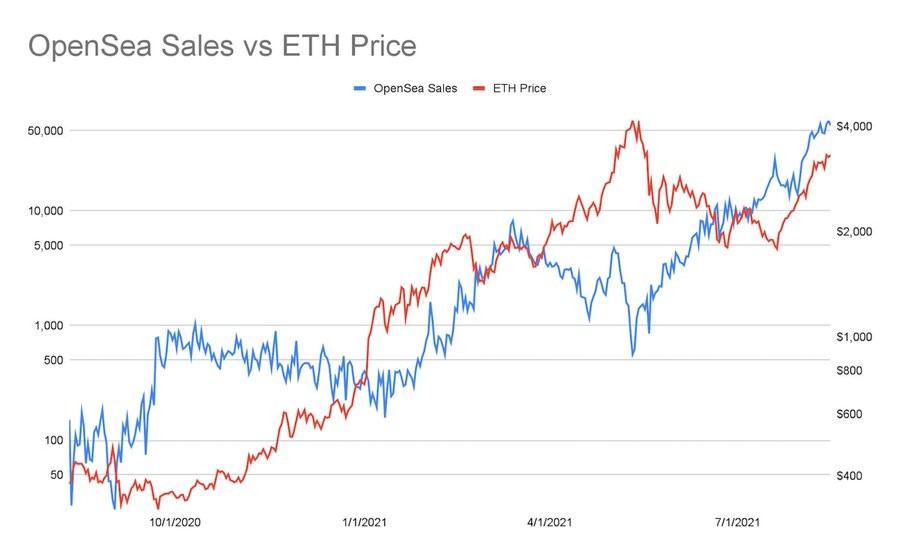 Decentraland is a virtual world that gives users the ability to buy and sell LAND, Estates, Avatar wearables, and names. Users can also create artwork and the project is built on the Ethereum blockchain.

A feature included in June was the ability to create NFT fashion for avatars called wearables. In Decentraland wearable sales volume totaled $750,000 in the first half of 2021, up from $267,000 in the same period last year, according to NonFungible.com. 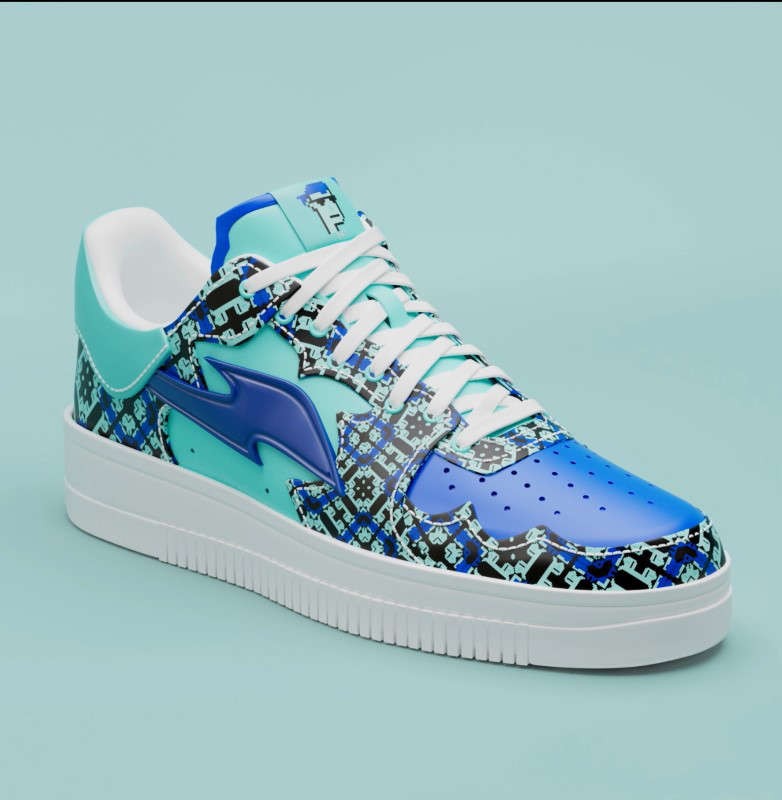 Big fashion houses are also keen to get involved with LVMH-owned Louis Vuitton launching a metaverse game where players can collect NFTs, and Burberry has also established NFT accessories for Blankos Block Party, a game owned by Mythical Games. Gucci has sold clothing for avatars within the game Roblox.

Fantom was another project seeking to hit the $1 mark this week with gains of 40% over the last 24 hours.

The project now trades around the number 63 spot in the list of coins with a market cap above $1.8bn. Fantom is riding the decentralized finance (DeFi) wave and hosts an all-in-one DeFi suite. Users can mint, trade, lend and borrow digital assets directly from their wallet, with near-zero fees and instant transactions.

The fMint feature allows users to mint dozens of synthetic assets, such as cryptocurrencies, national currencies, and commodities. The fLend feature gives the ability to lend and borrow digital assets to trade and to earn interest without losing exposure to your FTM holdings.

The $1.00 price was elusive for FTM in the past with the coin seeing a high above $0.98 in May before the Bitcoin slump pulled it lower again.

If you have any questions about 'Ethereum Price Consolidates but Gas Usage at 3-Month High, BTC, MANA, FTM, Aug. 30', let us know.