The market has been waiting so long for this $1.9 trillion stimulus package. Now that it’s done, what can investors look forward to now?

Oh, well this is convenient. …

With the economy reopening and the pandemic getting further behind us every day, it’s difficult to comprehend why the government is still printing money like it’s going out of style.

Sure, there are still plenty of people out there who are in pain, but if the last stimulus bill is any indication, only about 20% of that money will actually go to the citizens, and only a small portion of that will end up with the people who need it most.

Honestly, I should probably be the last one complaining here.

Over the last few days, I was considering winding down some of my positions in the market. Now, there’s no way.

So, between the free money from the government and a never-ending bull run, I’d imagine that many of us are making out like bandits.

Still, it’s difficult to ignore the irreparable damage that this will inevitably do to the global economy.

Apparently, I’m not the only one thinking like this either. As I write to you, Congress is holding a joint hearing with Federal Reserve Chair Jerome Powell and Treasury Secretary Janet Yellen.

The hot quote coming from J-Pow is:

Not sure if that’s a direct quote, but that’s pretty much the gist of the statement.

Listening to these hearings does sometimes seem like watching a car crash in super slow slow motion, only with an unnecessarily garrulous monotonous voice-over narration.

Bloomberg’s Michael McKee summed it up rather aptly on live tv as a “cats and dogs hearing where we didn’t learn very much and a lot of political grandstanding.”

In short, they don’t care about inflation. They crave it. More than their words, their actions are evidence of this.

Yeah, inflation is a boon for bitcoin…big time. But bitcoin is extremely volatile. The coming of age of digital scarcity is playing out on the world stage, and it’s certainly reflected in the price.

We may be off the highs, but strong psychological support has been gradually building above $50,000 per coin.

As an investor, it’s prudent to seek out the areas of the market that the mainstream may be missing, and in my mind, the glaringly obvious opportunity here is in precious metals and stones, for example physical gold, silver, diamonds.

As long as Elon Musk and Jeff Bezos have yet to figure out the logistics of mining asteroids, which may take a while, these shiny objects will hold their value against inflation better than most anything you can think of.

The fact that the market is completely ignoring them is only a bonus in my mind.

Here we can see a long-term graph of gold, with each candle representing one week. For visible clarity, we’ve circled in purple the March 2020 global multi-asset sell-off and quick bounce back.

The subsequent months saw gold accelerate due to the intense fiscal and monetary stimulus. But wait, it’s now almost back to post-pandemic levels. … 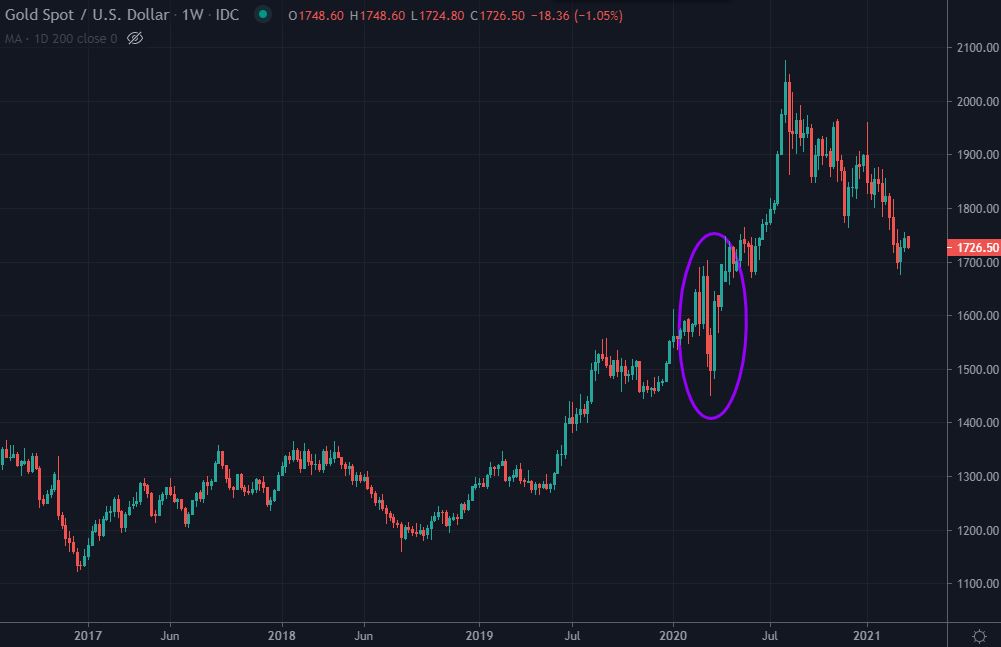 The only possible explanation for the decline over the last few months is that bitcoin came in and stole gold’s thunder. That’s fine.

Bitcoin may be better than gold in many ways, but on a relative cost/value basis it’s quite clear that many physical commodities are cheap right now.

If for nothing more than to diversify my holdings and stabilize my portfolio, I’m a buyer.

If you have any questions about 'New U.S. Stimulus Package is Bullish for Markets', let us know.