Financial inclusion is one of the most important topics in blockchain, because we have a once-in-a-lifetime chance to actually do something about it.

Financial inclusion is a big problem, so I’ll simplify it into a few easy-to-understand examples, then show how blockchain technology can solve it.

Most importantly, I’ll show why you should care. 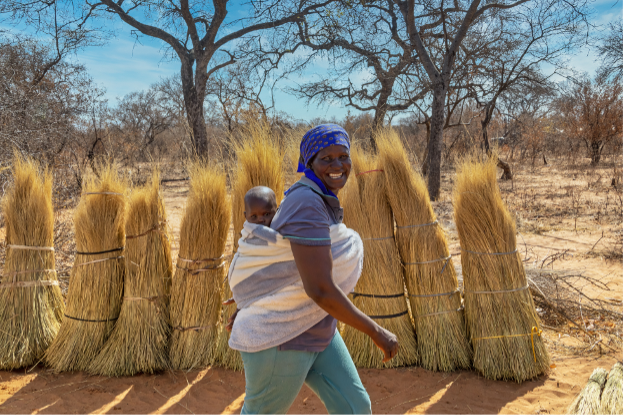 The Story of Zawadi

Zawadi is a mother in Kenya who lives in a remote village. She needs access to money to buy groceries for her family, but it takes a full day to walk to the nearest bank. Today she sends a simple text message to transfer e-cash to a local “agent,” who meets her in town and gives her physical cash, kind of like a human ATM.

This is the magic of M-Pesa, a mobile money system that was introduced in 2007 by Safaricom, Kenya’s largest mobile provider. It’s kind of like Venmo, but there’s one key difference: you don’t need a bank account.

M-Pesa users can convert between e-cash and real cash using local agents, who are retailers or local businesspeople authorized to provide and receive cash (they receive a small fee for their services). Think of them like “human banks” in places where there are no banks.

This was a service that Kenya desperately needed: just five years after its launch, 83% of Kenyan adults were using M-Pesa (see the excellent HBS case study for how they rolled it out). It was a solution that involved technology plus humans to “bank the unbanked.”

The convenience of M-Pesa has made it so Zawadi can focus her time on more valuable activities, like learning new skills or teaching her kids, instead of taking a day or two to walk to the bank. That’s financial inclusion. 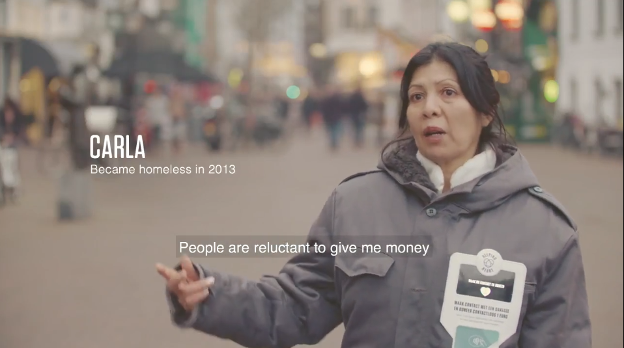 The Story of Carla

Carla is a homeless woman in Amsterdam who had a particularly difficult time during the pandemic. She spent much of her time sleeping on the couches of friends and acquaintances, with occasional nights at local homeless shelters, always with the fear of catching COVID-19.

Carla lives on cash, often panhandling for her daily needs. At the height of the pandemic, no one wanted to reach into their wallets or touch another human being, which meant she had to spend some days even hungrier than usual.

The Helping Heart contactless jacket is a social experiment designed by ad agency N=5 that allows people to donate to Carla by just holding up their mobile phones to her jacket. The money can only be redeemed at her local shelter, for food and other basic items.

The technology also allows Carla to save a little bit from each charitable donation, so that she can build toward a more stable future. Her Helping Heart coat is a mobile banking account – quite literally! It’s a way of using technology plus humans to help bank the unbanked. 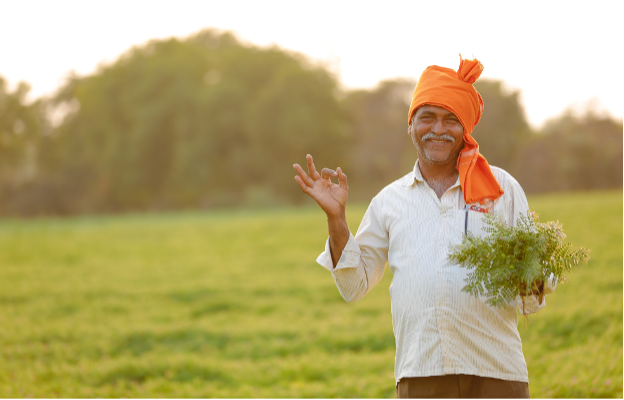 The Story of Siddharth

Siddharth is a rural farmer in Kalahandi, India. His life is difficult, as he has only a small plot of land, so it’s difficult to get economies of scale. India’s monsoon season is unpredictable: too much or too little water and he’ll lose his crops. Even on a good year, he has to market and sell his harvest in a country where half of the 1.3 billion people are also farmers.

He’s not alone in his struggle: poverty in India is so widespread that the government has long searched for ways to address the “welfare state.” After decades of throwing money at the problem, the country invested in a visionary project known as India Stack to solve the hard problems of money and identity.

Think of India Stack as an open-source digital infrastructure (a set of open APIs) that gives everyone access to:

Now Siddharth can easily receive government grants for his small farm: he scans his fingerprint at a local bank to confirm it’s him. The money is sent to his digital wallet, eliminating the need for paper checks, reducing the money lost to middlemen and corruption, and getting him the financial assistance he needs.

Since the first part of India Stack was introduced in 2009, the economy has been on a growth spurt: from 2014 to 2018, India was the world’s fastest-growing economy, beating even China.

Again, India Stack is a way of using technology plus humans to ensure that Siddharth has access to money, and an easy way of proving his identity so he can receive that money. That benefits everyone.

The Simple Formula for Financial Inclusion

Jean-Michel Godeffroy is the former director of the European Central Bank, which is the financial hub of the European Union. It’s an oversimplification to say, “He designed the euro,” but he spent sixteen years working on it:

So he kind of designed the euro.

This week I had the pleasure of hearing Godeffroy speak about financial inclusion, and while acknowledging it is a big, hard problem, he gave a simple formula for how blockchain can help solve it:

Central Bank Digital Currencies (or CBDCs) simply means that every government will eventually issue their own cryptocurrency. So the U.S. will have a “digital dollar,” the EU will have a “digital euro,” and so on. These will function like today’s stablecoins, but with the full participation of the federal government.

Digital wallets are typically accessed through a computer or a mobile phone (not necessarily a smartphone), as in the examples above. When you think “digital wallets,” think of everything in your wallet: your government ID card, credit cards, and cash. The good news is that there are about 5.6 billion adults on planet Earth, and over 5 billion mobile phones. We’re almost there.

Godeffroy’s Formula says that with government-backed digital currencies, plus digital wallets on human phones, we can solve the hard problem of financial inclusion, because we can get money to everyone with a mobile device, even those without traditional banking accounts.

Why Financial Inclusion Benefits You

There are plenty of people who can’t get easy access to money or credit. Why should you care?

Imagine a run-down neighborhood in the middle of your city. When you go downtown, things get a little seedy. There’s graffiti and broken windows. Some of the streetlights are broken, so people avoid going there after dark.

Most important, the roads are crap.

The city puts lots of money into the surrounding neighborhoods: the roads are well-maintained and the trees are healthy. So over time, people start moving to the suburbs.

Businesses follow, boarding up their shop windows, leaving downtown to decay and wither. In time, this economic depression spreads beyond downtown, like a mold. Eventually suburban house prices drop, and everyone’s overall quality of life declines.

Now imagine a new city government comes in with a plan for revitalizing the downtown area. They offer tax benefits to stimulate new businesses, invest in education programs to inject a fresh pipeline of talent. Most important, they fix the roads.

As the roads get better, people start driving through town again. It becomes a bustling thoroughfare, and businesses follow the traffic. Over the next 10 years, the downtown area becomes a thriving metropolis. Real estate prices soar. The restaurants get better. Downtown goes “uptown.”

This happens all the time: it’s called gentrification. And in this simple example, it all starts with infrastructure: fixing the roads.

The downtown residents are like the unbanked: as the rich get richer and move to the suburbs (i.e., have access to money and credit), the poor get poorer, stuck in the middle of the city, which slowly turns into a ghetto.

It’s all connected. It’s not just about seeing homeless people getting back on their feet, instead of living under a bridge. It’s not just about a single mother of four being able to get a loan instead of waiting in line at the food bank. It’s that these people are able to be more productive, have more self-esteem, and contribute more to the greater good.

Financial inclusion — fixing our financial “roads” — raises everyone’s quality of life, including yours.

When the poor benefit, then more benefit. 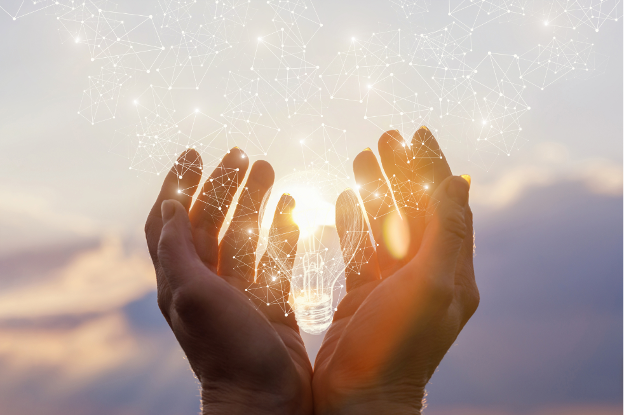 Why Financial Inclusion is Better Government

Imagine CBDCs can be used only to buy specific things, like food stamps that can only be used for food. Imagine if the COVID-19 stimulus checks could only be used for household necessities, not gambling or dogecoin. With programmable digital money, that’s possible.

As the India Stack has shown, programmable money can be used to reduce corruption and middlemen, and get need-based money directly into the digital wallets of those who need it. That makes for a safer and better government, a more efficient use of your tax dollars.

It’s expensive for governments to serve the poor, who often don’t have bank accounts, or know how to manage money when they get it. CBDCs plus digital wallets are a solution that everyone can get behind: conservatives, liberals, and everyone in between.

As blockchain investors, we’re helping to make this transition.

Every time we introduce someone to digital currencies, we’re stepping up the pressure on governments to get serious about CBDCs.

Every time we install a digital wallet, we’re stepping up the pressure on banks to embrace the move to crypto.

Whenever you share this article with someone, you’re helping spread the word.

If you have any questions about 'The Simple Formula for Financial Inclusion', let us know.